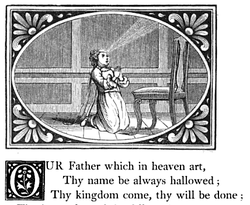 The Puritans believed that literature's sole purpose was to save souls.  The sinful child could be saved by strict moral tales, lessons, hymns and poems.  Most of these were rooted in biblical scripture.
1686 - John Bunyan's Divine Emblems: or Temporal Things Spiritualized and A Book for Boys and Girls: Country Rhymes for Children - - - both of these volumes extolled virtuous living and used nature as an analogy for teaching biblical lessons to young people.  The books contained some illustrations and
short verse for young people.
1715 - Isaac Watts's Divine Songs Attempted in Easy Verse for Children - - - similar to Bunyan's tomes for children, Watts has written small verses with some illustration inspired by the Bible.  Just a few pages continually use the words "heathen", "Christian rage", "Hell", etc.  Very fierce verses for young children.
1763 - Charles Wesley's Hymns for Children - - - From the introduction by John Wesley: "There are two ways of writing or speaking to children: the one is to let ourselves down to them, the other to lift them up to us."  This book consists of very strict, religious hymns.

Source of above verse:
Bunyan, John,Brown, John. ([1889) A book for boys and girls; or, Country rhymes for
childrenNew York, A.C. Armstrong & Son 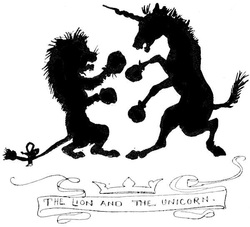 Cheap chapbooks were sold on the streets and in stores to the common "chap" during the 17th and 18th centuries.  Some of these were for children and featured street rhymes, games, jokes, short comical verses and emphasized some FUN for a change from the strict religious lessons taught in more formal volumes, as mentioned above.  Chapbooks would have probably been seen by the upper classes as filth.
1650 - Mother Goose's National Rhymes of the Nursery - - -
Mother Goose was actually a collection of numerous authors of these fun short verses for young people.  Many did teach lessons and some of them with cruel consequences, but many were just filled with enjoyable stories that widened the imagination.  Most of us today know many of the Mother Goose nursery rhymes such as Wee Willie Winkie, Little Miss Muffet, Hey Diddle Diddle, the Cat and The Fiddle and many, many more!  These rhymes have made a major cultural impact on modern society.
1744 - John Newbery's Little Pretty Pocket Book - - - Subtitled: "Intended for the Amusement of Little Master Tommy and Pretty Miss Polly with Two Letters from Jack the Giant Killer". This is generally considered the first children's book and contains alphabet rhymes and many illustrations for young people to enjoy.
1766 - John Newbery's Goody Two Shoes - - - Included many "Lessons for the Conduct of Life" told in verse for young children.  Newbery was one of the first authors to combine the idea of entertainment and education for young people.  This idea has stuck with us all of these years and serves as a good model for many modern children's books - in verse or not - today.
1789 - William Blake's Songs of Innocence and Experience - - - Blake's gorgeous verses and illustrations exemplify the innocence of childhood rather than the previous emphasis on the innate sinfulness of young people.  This presents a much brighter outlook of life for children.  Many of these are familiar today, such as "Little lamb, who made thee?". 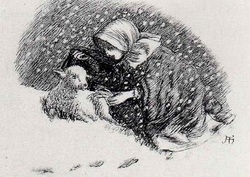 Building upon the view of childhood that William Blake introduced in the late 18th century, the 19th century continued the mindset that children were, more or less, innocent creatures needing to be nurtured and educated.  Our modern era's child-centric attitude has not quite emerged, as many children were still admonished to be seen and not heard, but children's verse published during this time seemed to admonish the fun-loving, imaginative nature of children.  There was an abundance of quality children's literature in verse and prose that came about during this century.  Many of these were written by women authors.
Some highlights:
1804 - Ann and Jane Taylor's Original Poems for Infant Minds - - - This book presented simple, cheerful verse for young children that balanced sweetness with plenty of moral lessons.
1805 - Sarah Martin's The Comic Adventures of Old Mother Hubbard and Her Dog - - -
This volume was extremely popular in the 19th century and was, in essence, a humorous children's picture book told in verse.  There was an illustration on each page and a verse beneath.   (See below image.) 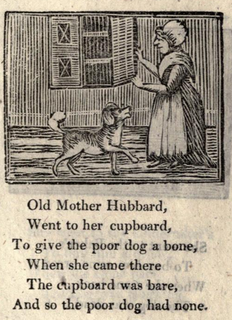 Source of above image:
Martin, Sarah Catherine,Ravenhall, Mary.The Comic Adventures Of Old Mother Hubbard
And Her Dog: A Facsimile. San Marino : Henry E. Huntington Library And Art Gallery,
196. Print.
1834 - Mary Howitt's Sketches of Natural History - - - Lovely verses about nature and animals with some gorgeous illustrations.  Her most famous poem is the "Spider and the Fly", parodied by Lewis Carroll in Alice's Adventures in Wonderland.
1846 - Edward Lear's A Book of Nonsense and (1897) Nonsense Songs - - - A hilarious and fun book of nonsense verse.  Enjoyable poems, limericks and his own illustrations.  Lear used clever wordplay, sarcasm, parody and silliness to engage his young readers and their care-givers.  Click here for a video of his A Book of Nonsense; his work is still very popular today.
1865 - Lewis Carroll's Alice's Adventures in Wonderland and (1871) Through the Looking Glass - - - These classic novels included verse throughout, including lots of nonsense verse, parodies of serious verse and silliness.  His poem Jabberwocky was included in Through the Looking Glass and remains as one of his most popular works.  Most young people today are familiar with the nonsense poem and learn it in their literature courses at school.  Here is a great parody from The Muppet Show.
1872 (orig) - Christina Rossetti - Sing Song - - - This is a beautiful book of verse dedicated to mothering and nurturing children. This book was written to nurture the mother-child relationship as well as enable mothers to teach their young children essential skills.  Many illustrations are also included, such as the image above near this website's 19th Century section title with the picture of the lamb and child in a snow storm.
1896 - Hillaire Belloc's The Bad Child's Book of Beasts, More Beasts for Worse Children (1897) and Cautionary Tales for Children (1907) - - - These books are definitely a portent in things to come regarding satirical children's verse, such as Shel Silverstein's.  These are humorous poems that parody the serious cautionary tales of the previous century.  Some are even a bit shocking in their violence.  The illustrations are simple and silly and the verses are tongue-in-cheek and sarcastic, surely enjoyable for both parent and child. 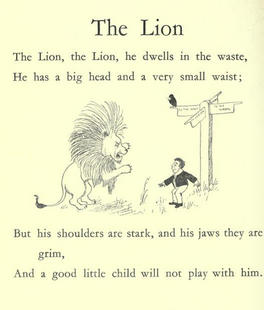 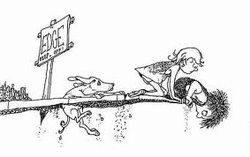 The 20th century brings with it a new child-centric attitude.  Many advancements in childhood education and upbringing influence the children's publishing industry.  Children's literature in the form of picture books and novels seems to be more popular, but poetry still has its readers in children of all ages.  The 1960s brought with it a turn toward more serious-minded problems presented in children's poetry as well. There are so many authors and titles from which to choose!  Here are only some highlights in children's poetry from the 20th century:
1924 - A.A. Milne's When We Were Very Young and Now We Are Six (1927) - - - The creator of Winnie the Pooh publishes a couple of lovely, sweet poetry books, including illustrations by the wonderful Ernest H. Shepard.
1937 - Dr. Seuss's And To Think That I Saw It On Mulberry Street and countless others, including The Cat in the Hat, Horton Hears a Who, The Lorax, etc. - - - Landmark author!  Dr. Seuss is a now a household name and has been for much of the 20th and 21st centuries.  His books have colorful, outlandish illustrations paired with clever rhyming poems with nonsense words and engaging cadences.  Seuss is a master of allegory and adults as well as children get so much from each story.  And To Think That I Saw It On Mulberry Street is now even available as an ipad app! 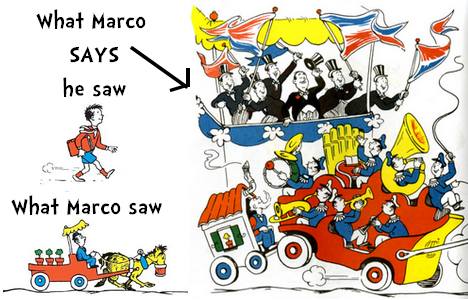 Source of above image:
Seuss. And To Think That I Saw It On Mulberry Street. New York : Random House,
[1989], c1937. Print.
1964 - Shel Silverstein's The Giving Tree (video here) and many others including Where the Sidewalk Ends (1974) and A Light in the Attic (1981) - - -  Silverstein has influenced generations of children in the 20th and 21st centuries and is often the first poetry that young children absolutely LOVE.  His poems are fun, with illustrations reminiscent of Edward Lear, sarcastic and irreverent.  His poems are very easy for kids to have fun with and his books are often some of the most popular children's books in libraries across the globe.
1967 - Stephen Dunning's (compiler) Reflections on a Gift of Watermelon Pickle - - - Modern poems from a variety of authors are featured in this volume along with black and white photography.  This ground-breaking poetry anthology for children introduced young people to classic and contemporary poets, ranging from Edna St. Vincent Millay to Eve Merriam's classic "How to Eat a Poem". 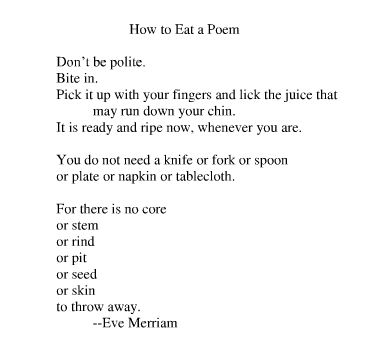 Source of above verse:
Dunning, Stephen, Edward Lueders, and Hugh Smith. Reflections on a Gift of Watermelon
Pickle-- and Other Modern Verse. New York: Lothrop Lee & Shephard, 1966. Print.
1974 - Michael Rosen's Mind Your Own Business and many other poetry book titles including Michael Rosen's Book of Nonsense (1997) and Poems for the Very Young (2004) - - - Michael Rosen continues the trend of humorous, sarcastic poems for children.  His books are filled will silly illustration and wacky poems to tickle a child's funny bone.  Rosen is British and particularly treasured in the UK because he made poetry accessible to young people in such a fun way.
1976 - Jack Prelutsky's Nightmares: Poems to Trouble Your Sleep and 49 other titles of poetry books for children, including The New Kid on the Block (1984) and I've Lost My Hippopotamus (2012) - - -  Prelutsky's work is rather similar to Silverstein's in that it is filled with humorous, sarcastic verse with lots of clever word play and fun line illustrations.  Prelutsky is always popular with kids and parents alike and his work is very approachable for reluctant readers.
1995 - Joyce Carol Thomas' Brown Honey in Broomwheat Tea and other titles like Hush Songs (2000) and A Mother's Heart, a Daughter's Love (2001) - - - Thomas is an African-American poet and author for children and her titles examine family, friendship, love, faith and history in a beautiful way.  Her books speak to young people and her warm, gentle verse is simple and startling in its depth.
1999 - Karen Hesse's Out of the Dust and other novels in verse like Witness (2003) and Aleutian Sparrow (2005) - - - Hesse won the Newbery Medal for her amazing novel in verse Out of the Dust, which was a poignant and vibrant story featuring a young girl and her hardships during The Great Depression.  Her novels in verse are such heartfelt stories and even reluctant readers are attracted to her style of writing.  Karen Hesse introduced in the late 90s a trend in children's and YA literature toward novels in verse that still exists today.
2001 - Naomi Shihab Nye's (compiler and poet) What Have You Lost? as well as 19 Varieties of Gazelle (National Book Award Finalist) (2002) and Time You Let Me In (2010) - - - Nye has published numerous original works for children as well as anthologies celebrating the deep issues in life.  She has also compiled numerous gorgeously illustrated children's poetry books featuring authors from all over the world.  She has also published works written by children in the United States, the Middle East and all over the globe.  Her work inspires children to write poetry themselves and teachers to integrate poetry into their daily lessons. 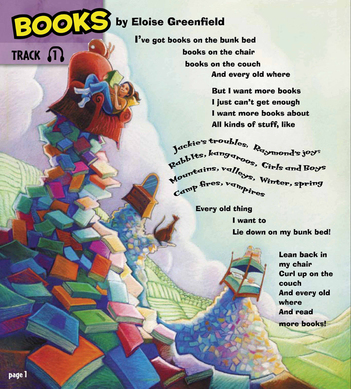 Source of above verse:
Giovanni, Nikki., Medina, Tony., Perdomo, Willie.Scott, Michele., eds.Hip Hop Speaks To Children: A Celebration
Of Poetry With A Beat. Naperville, Ill. : Sourcebooks Jabberwocky, 2008. Print.
2008 - Nikki Giovanni's Hip Hop Speaks to Children as well as other poetry titles like Ego-Tripping and Other Poems for Young People (1973) and The Sun is So Quiet (1996) - - - African-American acclaimed poet, Giovanni has written numerous poetry books for children and emphasizes rhythm, beat and the sound of the streets in many urban themes.  She emphasized themes like friendship, family and belief in oneself to encourage young people.

Source for all of the above history sections:
Hunt, Peter,eds. International Companion Encyclopedia Of Children's
Literature. London : Routledge, 2004. Print.

Throughout history, children's poetry has been used in many ways.  What are some of those ways?  How do they compare to how poetry is used today?